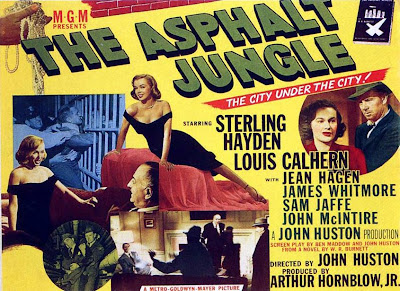 Police Commissioner Hardy:  People are being cheated, robbed, murdered, raped. And that goes on twenty-four hours a day, every day in the year... But suppose we had no police force, good or bad...  The battle's finished. The jungle wins.

At the beginning of the movie Commissioner Hardy portrays the policemen as heroes, as the guardians of society.  However as director John Huston narrates the preparations for a robbery and we sympathise with some of the thieves - especially with the lower class ones, losers with good feelings:  We are told about their families and their dreams.  In contrast to them the upper classes and some of the policemen are seen as individualistic and corrupt.
The movie reflects one of the main themes present in W.R.Burnett novels: The city, the asphalt jungle is a place of corruption and sin whereas the country is associated with purity, with the innocence that's lost in the city.  Dix Handley - a country man who is forced to rob to escape from poverty - says: One of these days, I'll make a real killin' and then I'm gonna head for home. First thing I do when I get there is take a bath in the creek, and get this city dirt off me.
However the odds are against them.  Our characters are doomed:  What can you do against blind accidents? - Doc says.  Things will turn out wrong, sometimes because of just bad luck, fate:  Ciavelli is wounded when a gun is dropped.  Doc is arrested after watching a young girl dance for too long when he was escaping.
When Dix - wounded after a gun incident - reaches his farm he dies with his dream because as Dr. Swanson says: He hasn't got enough blood left in him to keep a chicken alive.
Posted by Classic Noir Movies at 03:57 14 comments: 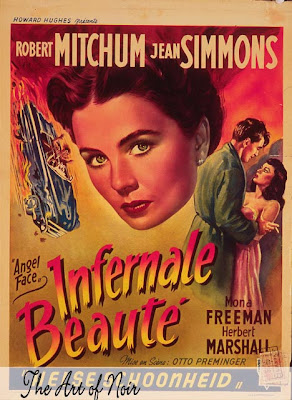 Frank: Well, hello! You do get around fast, don’t you?
Diane: I’ve parked my broomstick outside
Frank: Beer Harry! And what do witches drink?
Diane: Just coffee

Earlier that night Frank had driven an ambulance to a wealthy mansion to find Diane’s stepmother, Mrs Catherine Tremayne (Barbara O’Neil), almost dead in her bedroom. Her husband - a famous writer called Charles Tremayne (Herbert Marshall) – had just come in time to save her from dying asphyxiated. It seems there was a problem with the gas but the lady thinks maybe someone wanted to kill her for her money.

When Frank was leaving the house he met Diane for the first time. She was playing a sad piano piece and they felt an immediate attraction for each other.

Frank breaks up his relationship with nurse Mary Wilton (Mona Freeman) and Diane convinces her family to hire him as the family chauffeur. From this moment on Frank will be trapped and manipulated by Diane. He thinks he may help her to fulfil his dream of having his own garage. However her angel face hides a troubled and obsessed femme fatale…

Angel face is a first class noir movie with suspenseful direction by Preminger, excellent performances by Mitchum and Simmons and a haunting piano song

Catherine: “Where are the keys?”
Diane: “In the car” (she sits at the piano and plays a sad melody…) 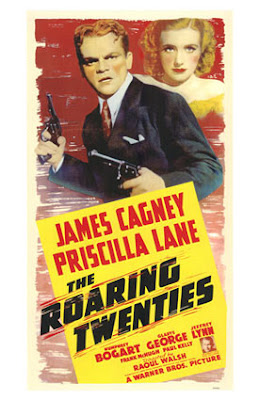 Narrator: Today, while the earth shakes beneath the heels of marching troops, while a great portion of the world trembles before the threats of acquisitive power-mad men, we of America have little time to remember an astounding era in our own recent history. An era which will grow more and more incredible with each passing generation until someday people will say it never could have happened at all.

The movie - based on a story by Mark Hellinger and brilliantly directed by Raoul Walsh - opens in this documentary style which will portrait two important decades of American history.
War veteran Eddie Bartlett (James Cagney) finds difficulties when he returns home: he has no job, the prohibition era has started and soldiers are no longer heroes:

After some frustrated attempts to get a job he enters the bootlegging business almost by chance and he meets speakeasy hostess Panama Smith (Gladys George) and former war colleague, the ruthless George Halley (Humphrey Bogart).
The film portrays the rise of Eddie in the prohibition and jazz age (in the soundtrack we can hear many songs of that time as My Melancholy Baby, It had to be you or Bye bye Blackbird).
Eddie is not portrayed as an evil gangster but as a character caught between the need to survive and a good natured heart: He helps Jean (Priscilla Lane) though she will never love him: They live in different worlds and in fact she will take some advantage of his good will…

As other gangsters Eddie Barlett was also bound to fall: After 1929 things changed deeply in the Depression era, the prohibition was over and the gangster world had changed…

Panama: It's over for all of us: you, me, and George. Eddie, something new is happening, something you don't understand. 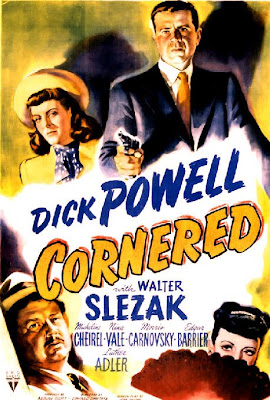 Laurence Gerard: “I have a job to do, my wife is dead!

Jarnac is reported to be dead but after finding the cover of a dossier about the criminal, Gerard is convinced he is still alive. After following the collaborationist’s trail to he learns that Jarnac’s widow is living in .

Once in Gerard meets several people: Incza (Walter Slezak), Mrs Camargo (Nina Vale), Mr Santana (Morris Carnovsky)… but in a world of half-truths, deception and shadowy characters he doesn’t know who to trust.

The film was made one year after the same team (blacklisted Edward Dmytryk, Adrian Scott and Jon Paxton together with Dick Powell) had filmed Murder my Sweet. Both films share an atmosphere of moral decay. The photography of this post-war noir movie is dark and full of shadows… a metaphor for the hidden faces of evil and fascism…

Jarnac: “How many times must I tell you that our chief aim for the next five years, for the next twenty years if necessary, is complete and absolute obscurity?” 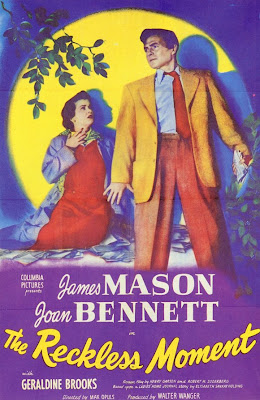 Bea Harper: When you're seventeen today, you know what the score is.

Lucia Harper (Joan Bennet) is a busy mother in this blend of noir and melodramatic movie. She takes care of her middle class family while her husband – who never appears in the film - is away on business. Her teenage daughter Bea (Geraldine Brooks) is seeing Ted Darby (Sheppard Strudwick), an elder man of dubious reputation. Lucia travels to LA to ask him to stop seeing her daughter. He only agrees to do so if he is given a good sum of money, however Bea wants to see him again.

After Ted’s accidental violent death Lucia will handle the situation. In a reckless moment she will get rid of the body in . Later she will be the victim of blackmail by Martin Donelly (James Mason) who has the love letters Bea and Ted had exchanged. Lucia tries to face the situation herself, keeping the family away from the whole affair. Martin, who has fallen in love with her, is impressed by her efforts to protect her daughter and he is willing to stop the pressure on her, however, his boss named Nagle (Roy Roberts) doesn’t agree…

A remarkable performance by Joan Bennet, in a mature and maternal role, far from the femme fatale she was in some of her Lang movies.

Lucia Harper: You don't know how a family can surround you at times.
Martin: Do you never get away from your family?
Lucia Harper: No. 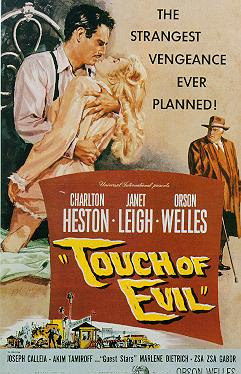 Mike Vargas: This isn't the real . You know that. All border towns bring out the worst in a country. In a memorable 3 minute shot we see how Mike Vargas’ (Charlton Heston) honeymoon in a Mexican border town is interrupted by an explosion that kills several people.
Vargas terminates his honeymoon and takes up the investigation, so does American policeman Hank Quinlan (Orson Welles). Soon it becomes evident that their methods and personalities are completely different.
Things become more complicated when Vargas’ American bride Susie (Janet Leigh) is kidnapped by Joe Grandi (Akim Tamiroff), the head of an underground drug family.

Quinlan’s presence dominates the movie: he fabricates evidence to frame his suspects. His intuition (his game leg) is usually right but he achieves his goals through abuse of power and other illegal means.

Vargas exposes Quinlan’s methods and there is no way out for the has-been cop. He wants to take refuge at Tanya’s (Marlene Dietrich) brothel and the sound of the pianola but his better days have passed:

Quinlan: Come on, read my future for me.
Tanya: You haven't got any.
Quinlan: What do you mean?
Tanya: Your future is all used up.

Tanya will pronounce the epitaph for the massive, vile, yet intuitive Quinlan:

Schwartz: Well, Hank was a great detective all right.
Tanya: And a lousy cop.
Schwartz: Is that all you have to say for him?
Tanya: He was some kind of a man... What does it matter what you say about people?
Schwartz: Goodbye Tanya.
Tanya: Adiós.

Posted by Classic Noir Movies at 09:18 No comments: 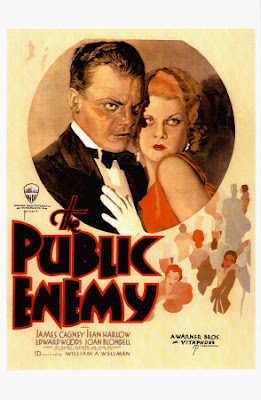 Mike Powers: Do you think I care if there was just beer in that keg? I know what's in it. I know what you've been doing all this time, how you got those clothes and those new cars… You murderers! There's not only beer in that jug. There's beer and blood - blood of men!

James Cagney and Jean Harlow star in this cornerstone gangster film which will influence the whole genre.
Tom Powers (James Cagney) and his brother Mike (Donald Cook) follow different ways from an early age. Mike, who will serve the country in the First World War, will have a daytime job and follow his studies in the evenings. Tom and his friend Matt Doyle (Edward Woods) are two young teenagers who are stepping into criminal life stealing small items. As they are getting into adulthood they become bootleggers in the prohibition era.
Their reckless life brings them wealth, fun and women as Kitty (Mae Clarke) or Gwen Allen (Jean Harlow). However Tom is getting tougher – in a famous scene he squeezes a grapefruit into Kitty’s face – and he is going the hard way. He has become an evil hoodlum who even executes a horse in revenge.
The bootlegging business turns into gangster war with Tom falling wounded in the gutter. It seems the suitable end of the film – which would be similar to other endings in later noir movies as in He ran all the way.
However Tom is taken to hospital and later he will “come back” home, an impressing scene with a following moral message…

Tom (stumbling wounded under the rain): I ain't so tough
Posted by Classic Noir Movies at 16:09 No comments: